Heavy Metal Hits of the 80s 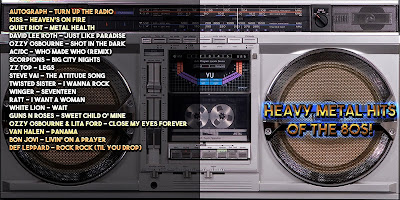 So, for my last post of Heavy Metal Week, I decided to do a nice compilation of some of the other bands that were out there in the 80s.  Some of them were one-off hits, others were songs by some big bands, but I didn't have the time (one week) or the tracks (no b-sides, demos or mixes) or I simply didn't care for the rest of the album/band.  I think you will enjoy it.  A great road-trip mix.

As I started this week I realized right away that what I was considering Heavy Metal, is no longer Heavy Metal, but Hard Rock.  The definition has changed over time.  When I was younger, this WAS Heavy Metal, because today's Metal didn't exist, yet, in the scope that it does now.  So, as I'm calling this Heavy Metal, I'm sure that some of you just roll your eyes and say "Yeah, right."  That's alright.  It's Metal to me, and at the end of the day, its my own perception that defines it in my life.  To be honest, most of today's "Heavy Metal" is shit.  Like everyone in the band is trying to play faster and louder than each other.

As for Heavy Metal Week, I'm glad it's over.  It's tough for me to stick to one genre for a whole week.  You'll notice that normally I jump from one genre and era to the next.  It keeps it fresh.  But, aside from a brief Christmas themed couple of days, I don't have anything planned for the rest of this year.  That being said, I would like to have a theme week starting January 9th.  I'm debating on what theme to use.  Here's a list of ideas-

So, which one do you think I should do?

While you're deciding, listen to this little comp.  And when you're head-banging, be careful not to slam your head into the keyboard.  You might break the keyboard. ;)