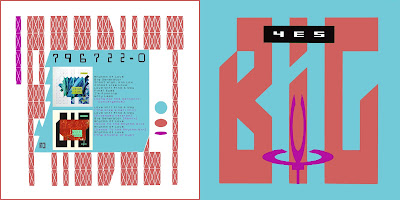 As a teen, I somewhat enjoyed Yes, along with the rest of the Post Prog bands out there, like Asia, Toto and the like, but I really didn't pay them much heed.  After the release of Anderson Bruford Wakeman Howe, I decided to pay attention a little more closely.  The 80's incarnation of Yes was definitely my favorite, and this was one of the albums from that period.

The entire album is great.  As with the previous album, this one has shaken off it's 70s Progressive style in favor of radio-friendly tunes to grow their fan base.  I'm not particularly in love with Rhythm Of Love, or the title track Big Generator, but I am totally infatuated with Love Will Find A Way and Shoot High Aim Low.  Those two tracks are two of the best examples of Yes' efforts at writing radio-friendly Pop songs.

I also found that Jon Anderson could sing about anything he wanted to, and I would think it was cool.  The band, as always, is extremely tight and well-performed.  Excellent performances.  And their harmonies are spot on with every song.  I do know that most of the song writing from this album and the one before - 90125 - can be credited to the extremely talented Trevor Rabin.  I'll try and post some of his solo stuff here later.  I think that his work is what allowed the 80s Yes to shine as bright as it did.

This post has the entire album, plus all of the remixes.  I changed up the cover a bit to make it match the colors from the single sleeves, pulling them all together.  A great 80s album, even if it isn't one of my regular fares.