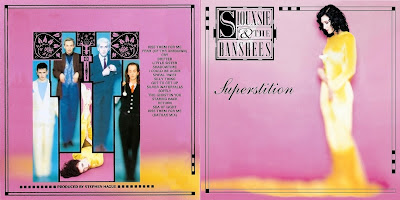 This one came out my Freshman year in college, shortly after I got back from Basic Training for the Air Force.  I had never been a huge fan of the Banshees (and I'm still not, to this day), but this album did have a few pop songs on it that attracted me.  I thought, after the glorious releases of Disintegration, Violator, Technique, Bona Drag and Wild!, that I'd get another group to add to the list of excellence that were my idols.

This album is good, I'll give you that.  I really enjoy the singles, and the b-sides, and there are a couple of album tracks that stand out as examples of some superior craftsmanship.  Albeit, I think Hague's production also had a direct influence on what was released.  I think this album helped bring the Banshees more into the mainstream pop music of the time, right on the cusp of the Alternative Boom in the 90s.

But, to this day, as I've said before, I can't stand Siouxsie's voice.  It drives me fucking bananas.  Musically, the band is superb.  I'm sure that if there was another vocalist, they would've been much more successful.  I just think her voice is an acquired taste.  You either love it, or you hate it.  Obviously, a lot of people like it, or they wouldn't have made it as far as they did.

So, although I'm not horribly fond of her, this album (and the rest of the band for that matter) are pretty fucking good.  My mix tapes of that era always include one or two of their tracks.

I didn't want to fuck with a Van Gogh, so I left the cover exactly as it appeared.  But, I couldn't find a good scan of it on the internet, so my version looks a little shitty.  If anyone has a better scan, please send it my way...

Email ThisBlogThis!Share to TwitterShare to FacebookShare to Pinterest
Labels: 1991, Siouxsie & the Banshees, Superstition