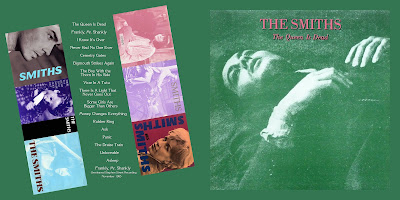 SO, my second favorite Smiths album, with several of my favorite Smiths songs.  Big Mouth, Ask, Boy with a Thorn, and Some Girls Are Bigger.  ALL are classic, CLASSIC Post Punk and classic Smiths.  For me, this was their break out/breakthrough album right before they went huge, and then imploded.  I was never a huge Smiths fan, but I really got into this album in late 96 and early 97.  I was working in Ames, Iowa for a restaurant chain as management trouble shooter.  I'd travel from Ames to Des Moines to Nebraska and back working for this chain in their stores, staying in hotels and racking miles up on my vehicle.  I was living in Nebraska at the time, working far from home, and had plenty of alone time in the car to listen to music.  I played this album time after time after time after time, memorizing it from the first note to the last breath.

Don't get me wrong, I think - by FAR - that Strangeways is a much better album.  But this one was an album that touched me when I was alone at a time when I needed people close to me.  My wife and I had only been married for 4 or 5 months, and then I was on the road for 5 months straight.  I think that it affected us in ways that still stay with us today. And this album was there for me (along with Monaco's first album, Radiohead's Ok Computer and D2's Medazzland.)

Of course, I've added all the time period appropriate singles with their b-sides, so we have a more complete picture of the year this came out.  The single sleeve images are fantastic, and I wouldn't mind using them elsewhere, but that's for other posts and collections.  I slightly augmented the color of the original cover image to give it a little more definition, not so dark.

But, you should like the arrangement here.  It flows naturally, and you won't have to change your disc for a full hour!  I don't know if I can handle an hour of the Smiths in one sitting.  I guess unless I'm at their concert, and that sure as hell ain't happening...

Email ThisBlogThis!Share to TwitterShare to FacebookShare to Pinterest
Labels: 1986, Morrissey, Smiths, The Queen Is Dead