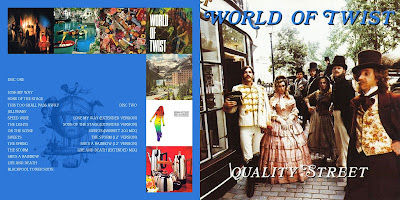 A quick and easy one tonight.  A nice little slice of British Madchester (right guys?)  Nothing to say here, just another of a long list of bands that disappeared as quickly as they appeared.  Love this one because of the trippy cover of the Stones' She's A Rainbow.

Who would've guessed you could get a double disc expanded edition of this?  Two discs, album on one and mixes on the other.  I hate the cover, but I don't know what else I could've done on this.  It's a dumb cover with a lousy font and I can't stand it.  The whole cover sorta reminds me of the 80s sitcom Cheers for some reason.  Maybe it's the font and the substandard photo.

A little unrelated note.  It is very uncanny how my posting is working out.  There are thousands of albums and groups to post from.  But, for some bizarre reason, my posts (and preparation of) seem to overlap with our fellow bloggers.  I have Dexy's Too- Rye-Ay coming up on the 11th, yet it's been posted over on another site today.  What are the odds?  And that isn't even the first time it's happened.  I just want you all to know that I have planned all of my posts about 2 months out, and I'm about 3 weeks ahead in making covers.  And, I never base my selections on what the other guys are posting.  I just want you to know I'm not a cheater without an original thought, it's just coincidence I guess...

Now, I'm off.  I spent my day off at work stripping and waxing the lobby floor.  Now, my body is beat up, and I missed a whole day with my family.  And the fumes of the floor finish have given me a monster headache.  Fuck it.