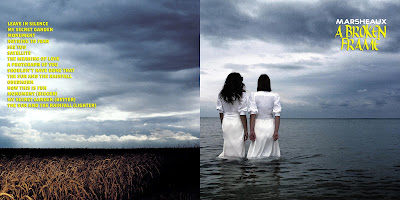 Alright, I will admit I'm a little embarassed to be posting this one.  I haven't ever been a fan of Marsheaux, I don't care for their music, really.  But, this IS a Depeche Mode album, even if it's just a cover version.  What's almost as embarassing is that I'm posting this version of A Broken Frame before I've posted the actual ABF.

BUT...  I heard a couple of the songs from this one, and they grew on me.  So, I listened to the whole thing and I found something great.  With indirect translations, they've done a pretty good job interpreting the originals as their own.  They maintain a lot of the original elements that made the originals great, but have added enough to make this dancefloor-prone.  I've read many different reviews on this one, and the best that I've read have said exactly what I've felt -  Marsheaux have taken the nostalgic synth past that I've always loved from a bygone era, and brought it into the modern day, to be relived, and reloved all over again.

My version differs from the original as I've included the non-album tracks and the remixes.  Other than that, you get it as intended.  Hopefully it will help you see the album in a new light as it did me.