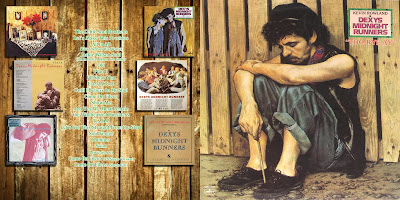 A nice way to end a stressful week, it's time to pop in a little DMR.  I know that one of our fellow sites just posted the official version of this last week, but I've had this one scheduled out for a month.  It's weird how that works out sometimes.  I think that you'll find mine to be different enough, though, to be worthy of downloading.

I remember being a fan of Eileen when I was a kid, playing on the radio.  But, the first time I took notice of DMR was when they played on an episode of the Young Ones.  MTV, back when they had great programming, was playing re-runs of Rik, Mike, Vivian and Neal back in the mid-80s.  Not only was I fascinated by the show, but I also loved all of the musical guest-stars.  This show was how I also discovered Motorhead, Madness and Nine Below Zero.  Watching Dexy's Midnight Runners play in a dark bedroom (or was it bathroom?) upstairs was great, and I was thoroughly impressed, even though it was lip-synced.  They played a cover version of Jackie Wilson Says (which then later led me to discover Van Morrision)

From what I can tell, this one has all the b-sides, demos and alternate single version.  I may have missed a few, but who's counting?  I always thought the cover was dull, and I still do.  I'm not a huge fan of it.  But, it is what it is, and I tried to do my best to dress it up.  Let me know what you think!