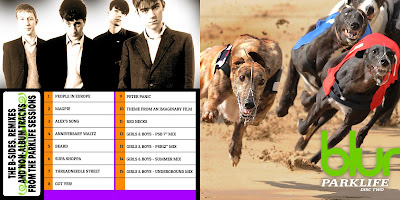 Absolutely cheated.  That's how I felt.  I was a junior in college, struggling to keep up with my studies while working 35 hours a week to make rent and pay for school.  I sacrificed 12 bucks to get a new album that I knew I couldn't afford.  I purchased Parklife, and put it in my CD player when I got back to my apartment.  Boys & Girls blared out of my speakers, and I sat in abject horror, not knowing what had happened to the Blur I knew only from their Leisure album.  This was not There's No Other Way.  This was annoying and twangy and it really pissed me off that the one album I chose to purchase, out of everything else I could have spent my money on, had been this one.  I listened to it twice, and finally sold it back to the used CD store for something else.

I eventually went back, years later, and repurchased the album to become more acquainted with it.  Honestly, it is a great album, with a lot of great material.  Some of my favorites include This Is a Low, Parklife, End of A Century, and a couple others.  And, their PSB remix of Girls & Boys is spectacular.

My ONLY qualm with these guys is their song Red Necks.  I feel that it is very prejudice and stereo-typical, and condescending.  In today's PC environment, I would say it is borderline on bullying of sorts.  I'm sure they wouldn't want me to sing a song about Brits with ugly teeth, or homosexuals or anything like that.  I am always told and I have always felt that I should accept everyone, regardless of race, religion, orientation, etc.  It's just that society has seemed to find it acceptable to make fun of Christian, white, American males, and then chastising us if we say anything about it.  I find it disgusting.

Regardless, the track is on this "Disc Two".  I weeded out the redundant demos and radio sessions, as they are unnecessary overall.  Also, no live tracks.  My front cover looks alright, but I hate how the back cover turned out.  Half tempted to scan the original back cover, take out the album tracks and put the new tracks in their place.