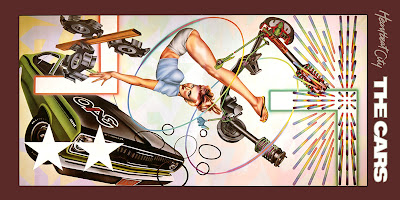 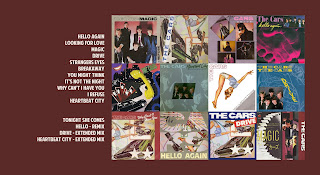 So, sometimes I make double discs with two covers, and single discs with single covers and double discs with single covers.  Well, here's a single disc with double covers.  If you can get your printer to line up just right you can print the front cover, then flip the paper and print the "inside cover" on the other side.  I did it this way to get the entire beautiful front cover without jacking with it, and then also the track listing and single sleeves as well.  I made this one probably two or three years ago for myself, and am just now posting it.

I always liked the Cars.  I got their greatest hits albums and listened to them regularly.  But, that was about it.  I didn't hear Heartbeat City all the way through until I was in college in the 90s.  I was working in a restaurant late on a Saturday night, probably close to midnight, and I was in back in the dish pit washing stacks and stacks of dirty dishes, pots, pans, you name it.  I was hot and sweaty and wet.  I smelled horribly from the food, grease and body odor.  I had the radio setting on a stack of boxes by the freezer listening to the local Classic Rock radio station.  They had a segment during one of the hours in which they would play an album from the very beginning all the way to the last track, uninterrupted.  That night, they played Heartbeat City all the way through, and I suddenly realized what a masterpiece it was.

Part Power Pop, part New Wave, Heartbeat City is a solid, well-written, powerfully performed and slickly produced album that is quintessential Cars.  All of the singles are great, and the album tracks could really have additionally been singles, as they all sound perfect.  The album arrangement really enhances the quality of each and every song, complimenting each other perfectly to achieve maximum impact.

I included Tonight She Comes from their 85 GH album, as it was lonely by itself and fit well with these others.  I also have a variety of remixes, and two fan mixes in there, as well that are really super.  Hope y'all like it.