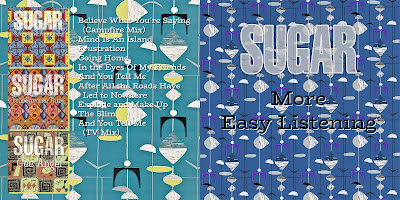 This is for my friend, Grant.  I know he loves these guys, and I wanted to do something special for him.

I know that all of these tracks were on the Sugar compilation called Besides.  But, I felt they needed to be their own companion disc to File Under Easy Listening.  The differences between the two recording sessions of Sugar's two albums caused the b-sides of each particular album to clash.

I love Bob Mould's voice.  I'd like to post some Husker Du albums, but I don't like the other guy's voice.  I think I may do a Mould compilation of just the songs that he sings.  That might be cool.

Always liked this Mould incarnation.  Listened to him all through college, and still do to this day.  I preferred Sugar to all the other College Rock/Grunge/Alternative bands out there.  The songs were a lot more substantial than anyone else out there, and they weren't over-hyped and over-played.

Off to watch Inside Out with my 5-year-old.  He has a sore throat and wants to watch a movie while I sooth him.  I'll enjoy being the nurturing father, now.

Have a great evening.

Email ThisBlogThis!Share to TwitterShare to FacebookShare to Pinterest
Labels: 1995, Sugar