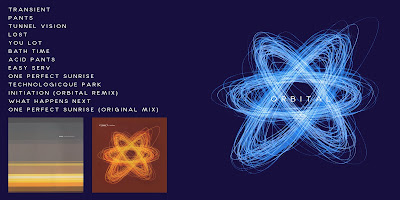 Not really much to change on this one, only slightly better than the original.  And, I don't know if adding their name in the middle detracts from the cover or not.  I always hated when bands didn't put their names on their covers.  Stupid.

The Blue album was supposedly their last, until they came back five years later and made Don't Stop Me/the Gun Is Good, then three more years with Wonky and Pusher.  Now, it's been four years, let's see if they come back again.  Not counting their soundtracks, I think this is probably their second worst album.  Not that it's a bad album, it's just not as good as all the rest of them.  Of course, One Perfect Sunrise and Acid Pants are classic Orbital, but I also really dig You Lot, a masterfully foreboding piece about genetic engineering.  Pretty cool.

Thanksgiving was good, we didn't do much other than eat.  I also sat around and watched Youtube, watching all the idiots acting the fool on Black Friday.  It's almost become a tradition around our house to sit and watch all the fights and insanity that people post from their shopping adventures.  Why anyone still goes out and does that anymore is beyond me, it's just not worth it.

Email ThisBlogThis!Share to TwitterShare to FacebookShare to Pinterest
Labels: 2004, Orbital