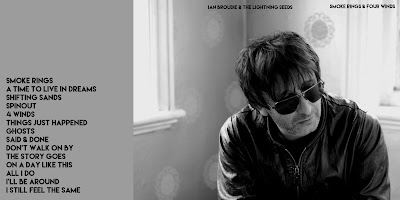 Technically, there is no such group as Ian Broudie & the Lightning Seeds.  There's also no such album as Smoke Rings & the Four Winds.  But, they are two separate releases, Ian's last solo outing and the last Lightning Seeds album.  Both, are soft and eloquent, but wholly ineffective and forgettable.  It's nice to hear Ian's voice, again, though.

After these releases, Ian released an album with the Wild Swans, and produced Miles Kane's albums.  Other than that, nothing.  Supposedly, he's busy in his home studio, doing what, I don't know.  And if you go to the official Lightning Seeds website, you get nothing but a white screen.  I know that he's been busy for 3 decades, but it's sad to see such a talented musician and songwriter finally call it quits.

But, don't be too disturbed, I still have a couple of his albums to post, yet.  But, enjoy this one, while we're at it.