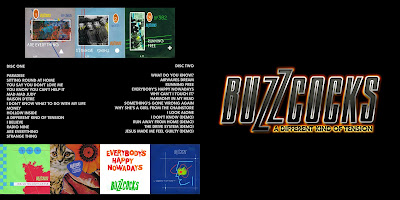 Firstly, I finally got my Music Hard Drive to work just about an hour ago.  So, I'm back in business for a while!

This was the Buzzcocks final album before the split.  It contains a wide variety of sounds that you wouldn't normally consider to be Buzzcocks or even Punk.  Maybe they could see the writing on the wall as their style of Punk would soon fade to New Wave, Post Punk and Goth.  Also, their seemed to be an extreme amount of drug use going on at the time that was splitting the band.

Despite it all, this album is put together very well, and showcases a lot of the talent that the band members had.  The songs were well written, the melodies were catchy, the message was good, and the performance was tight.  Even so, it wasn't enough to keep the members together.  Shelley was destined to go it alone...

I always thought the cover was a little wonky, so when I couldn't find a decent, high-quality version of it on the internet, I just used their logo to redo it, making it a little harder, a little more modern, and hella cool.  They have already released an expanded version of this album, but it didn't have all of the tracks from that period, but had repeat demos from album tracks.  I'd rather have all the b-sides and demos of unavailable tracks than Peel Sessions and demos of tracks already on the album.  I still had to cut it into two discs, though.  And at two discs and 28 tracks, it still comes out at 114MB, so the quality isn't the greatest.  It's definitely listenable and worth burning, but it's not the best it could be.

Email ThisBlogThis!Share to TwitterShare to FacebookShare to Pinterest
Labels: 1979, A Different Kind Of Tension, Buzzcocks