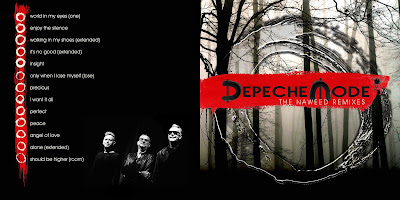 So, my last post before the Thanksgiving holiday, I decided to do something a little special.  I've compiled some of the remixes made by Naweed Wahla.  I can't say that I've compiled the best of his remixes, as he has about 50 mixes and I haven't even been able to listen to all of them yet.  But, of the ones I have listened to, these are pretty damn good.

A lot of times fan remixes are crap.  There are a lot of people out there who think they know what the hell they're doing.  But, every once in a while, someone with some talent comes along and can work some fantastic magic.  Naweed Wahla has taken songs from the entire spectrum of DM's discography and mixed them in a more modern, more dancey, more attractive package.  Although most of the songs on this comp are from the latter era of DM, he does a lot with the older tracks that I'll be posting later in January.  I like the second half of this album a lot because they are all songs that I generally didn't care for in their original form.  But now they've been crafted and molded in such a way, I can't help but enjoy them.

Anyway, I hope you all have a Happy Thanksgiving, and I'll see you on Saturday night!


Depeche Mode - The Naweed Mixes - Volume One
Posted by Unknown at 4:53 PM