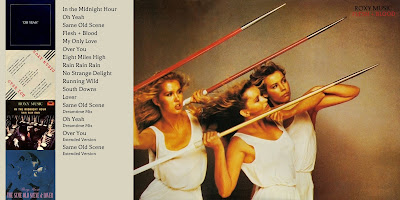 My second favorite Roxy album, Flesh+Blood.  I think I like it almost as much as Avalon, but not quite.  The cover songs sort of ruin it for me.  Anyway, by this time, they were well out of their previous incarnation, and firmly in the post-Disco New Wave catagory.  A touch more Disco than I prefer, but not nearly as much as Manifesto.

I know that a lot of reviews said this one was a tired, lack-luster and unimpressive album, but I have to disagree.  They weren't the proto-Punk of their previous incarnation in the early 70s, but they had a lot of talent and ideas still in them, and I think their sound, especially from this album, helped establish a style for all artists and bands that stretched well into the mid to late 80s.  And the album sold like fuckin' hotcakes even with the poor reviews, anyway.

As all of their single sleeves were ugly, I didn't want to use one for the cover, and the existing Seville cover is fantastic enough, so I left it alone.  There were two b-sides and two remixes, but then also the wonderful Dreamtime mixes, as well.  Favorite tracks are Oh Yeah, Same Old Scene, Flesh+Blood and Over You.