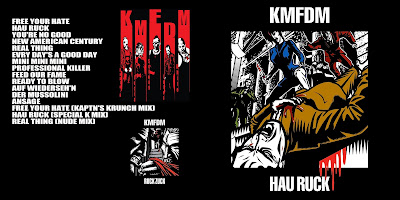 I don't know which I like better.  When KMFDM releases a remix album with a few bonus tracks a year after an album, or a staggering of singles throughout, with a b-side and mixes on those.  The remix albums really help in the matter, and basically that is what I'm doing here.  But, it takes the fun out of it for some of us if the job is already done.  Regardless, here we have Hau Ruck and the best mixes from Ruck Zuck.

Ever since Sasha released World War III, it's been a little more difficult for me to stay on board with the boys as I did pre-War.  I think that Adios and MDFMK were their pièce de résistance, and I was alright with Attak.  But, once they broke the 5-letter-title rule, I noticed the music started to sound more and more and more rehashed.  In fact, I'm not sure how many times they can sing about themselves before it gets old, but it's getting close.  It seems they mention themselves at least once, but closer to three times on every album.

The first track on this album, followed by the title track really really kick ass.  Especially Hau Ruck.  Fortunately, the rest of the songs hold their own, and the album isn't really that bad.  Even the two "b-sides" (?) are pretty good.  I think that a KMFDM greatest hits album is probably a worthy one, going against my "No GH" policy.  I can think of quite a few rockers that would sound good sandwiched around this title track.

So, I picked my favorite mixes from Ruck Zuck and tagged them on the end along with the two extra tracks.  Then, I recolored the front, just for fun.  I know that part of the magic of Aidan Hughes' artwork for the albums is the black and white with a single color, but I wondered if it might improve the look if I added some more.  What are your thoughts on that?

So, for All Saints day, I give you something that would've been better posted yesterday.  But, who the fuck cares.