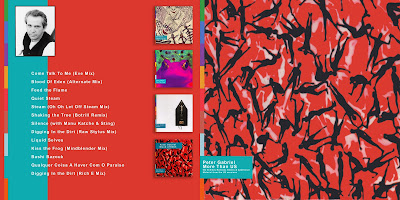 Funny, I just saw this album on another blog yesterday, and here I am posting it, having had it in the que for about a month.  I'm telling you, it's uncanny.

Actually, this isn't the album, it's more than the album, it's More Than US.  Clever, right?  I think so.  This came out my Sophomore year in college.  My wife and I hadn't started dating yet, and I was lonely.  My parents had just moved to Colorado, and I stayed put, so I felt I was being abandoned in a way, rather than getting my freedom.  It was rather scary.  Mind you, I was still living with my grandparents, but they had left for their winter in Texas, away from the cold.  So, I had the house to myself, no close friends left, as the ones I had, had gone off to school far away, and my friends from Chicago had long forgotten about me.  This album brought solace and understanding to my troubled soul, and I found comfort as I wrapped myself in it's warm melodies and powerful lyrics.

This is an album of a true artist.  A true songwriter.  Someone who is more interested in doing something meaningful and right, than in doing it for the fame and fortune.  I was already a PG fan, and this album simply reinforced my love for him.  The album is an anchor to a troubled soul and aching heart.

These tracks are technically remixes, but I almost see them as reinterpretations of the originals.  They don't carry the trappings of your normal remixes with dancey beats and extended keyboard segues, just the instruments used, but even some alternative vocals and other musical twiddlings.  The extra tracks were non-album tracks or guest vocal tracks from other artists, but fit perfectly with what PG was doing at the time.  They make excellent additions to this fine collection.

So, maybe tonight instead of watching some dreadful election programming, you could pop on a classic and relax with a glass of wine.  Leave the stress and anxiety to the buffoon and the criminal.  But, which is which?

Email ThisBlogThis!Share to TwitterShare to FacebookShare to Pinterest
Labels: 1992, Peter Gabriel, US