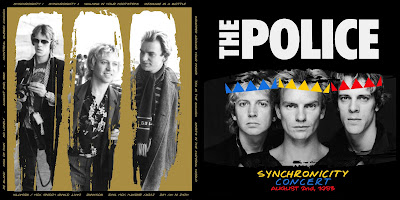 If I was given the option by a genie from a magic bottle to go back in time and see any concert I wanted, The Police in 1983 would be in my top 5.  Bowie during Ziggy Stardust, Elton John during Yellow Brick Road, Doors during... when Jim was alive, and the Who any time during the 70s would fill out my top 5.  But this one, the Synchronicity Tour would definitely be there, seeing the guys at their prime as a group.

I can't tell if this an excellent audience recording or a mediocre soundboard recording, I can't tell.  But it really gives you the feeling of being there in the crowd and experiencing a great show.  I own the DVD of one of the shows from this tour, and although it sounds great, their stage show was a little lacking, but maybe that's due to being a recording rather than being there.  I think I would want Sting to be wearing his Mad Max coat, too.

I know not everyone likes live recordings, but I think any good fan of any group should have at least one high quality live recording of every tour for their favorite groups.  Not every fucking show, just one for each tour.  It gives you the ability to capture their humanity and talent, as you can fake anything in the studio.  It's nice to hear them actually working, too.  Every show I go to I am impressed by the effort that each and every performer puts into their show, just to make it real for their fans. (Except for Morrissey.  I love his music and he sounds pretty good live, but I don't think there's much effort there and I don't think he respects his fans much.)

This show has a lot of great songs, but at 13 tracks it seems a little short.  They also cut out all of the banter, false starts and the little extras that make live performances so special.  This leads me to believe it must be an edited radio show recording...  Don't know.

Doesn't matter, it kicks ass.  So does Sting...  He the fucking bomb.