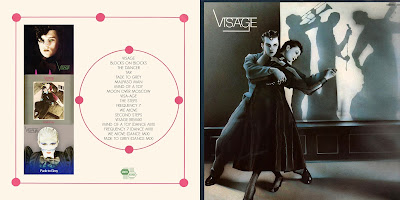 As I became more involved with music blogs and torrents and the beloved Discogs.com, I discovered an entire slew of bands and artists that I had never heard before, and that's if I had even heard OF them at all.  Visage was one of those bands.

I heard Visage for the first time probably in the late aughts as I began to rapidly explore the music landscape in detail.  My favorite bands were waning.  The time between albums, which used to be a year, suddenly became two years, three years or more.  And, I was getting old and having trouble getting into the "new" music being released.  I had to hearken back to my past.  There, I found thousands of releases, just waiting to be relished by the likes of me.

When compared to Classix Nouveaux or Ultravox, I always found Visage to be the sinister one of the three.  I would put them more in a category with darker bands like the Associates and the like.  Their style is different than their contemporaries, bordering on experimental, but they've still got that New Wave edge that hooks in a lot of their tracks.

I'm not a fan of all of their albums, but this one is one that I still listen to a lot, and keep as a regular for my New Wave moods that I slip into a couple times a year. (I hate to admit it, but right now I'm in an Exotica/Latin/Lounge mood.  Lots of Les Baxter and Esquivel playing at my house right now.)  And, in my highlights of 80s essential albums, you'll find this as well.

Pretty much a cut and dry cover, nothing extraordinary, and I added the remixes and b-sides, as usual.  I'll see you tomorrow...

Email ThisBlogThis!Share to TwitterShare to FacebookShare to Pinterest
Labels: 1980, Visage