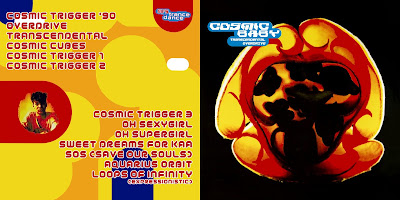 In 1993 I was actively looking for Techno music wherever I could find it.  Our local music store chain, Pickles Music, had it's own little section entitled "Techno" that I would pour over every time I went into one.  I remember specifically finding four different absolutely gorgeous CD singles by MFS one day, and bought every one of them.  There was Neutron 9000, Mind Gear, True Love and this one, Cosmic Baby.  They all sounded great, but Cosmic Baby consistently stood out as my favorite of the bunch (followed quickly by Neutron 9000).

MFS Trance Dance was a German label that put out some incredible music.  According to Discogs, this is where Paul Van Dyk got his start.  I got one or two of their compilations during the nineties to pair with my four wonderful singles.  But, now 20 years after the fact, those four singles are all that I have left from my original MFS discs.

On this one, I bolstered the disc from a mere 6 tracks, all the way to 13, including some of the additional single material released from the same year.  My scanner doesn't work (plus I'm too lazy) so I had to rely on the images I could find online. I then had to erase literally everything on the back cover, with the exception of the picture and the base design, so I could list all of the tracks.   I had to erase the logo on the front cover and retype it.  I used to make fonts for fun back in the 90s, and the very first font I made was a font emulating the type from this single cover.  If you google Chaos Fonts, you will find this one in my library on almost every font aggregator on the internet. Check these links - http://www.fontspace.com/chaos-fonts - http://www.1001freefonts.com/designer-chaos-fonts-fontlisting.php - http://www.dafont.com/chaosfonts.d335

This is great stuff, out of the mainstream, and a fine example of pure German Techno.  Hope you enjoy...