Orchestral Manoeuvres In The Dark - Crush - 1985 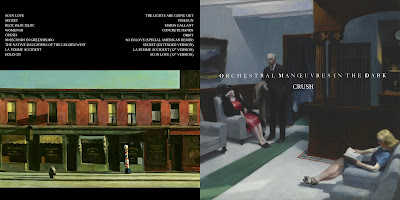 Probably my favorite OMD album second only to Architecture & Morality.  I think that Crush is probably one of the most underrated Orchestral Manoeuvres In The Dark albums yet also one of their most influential.  The style and sound of this album help to not only set the stage for all of their future work, but also helped define the sound of Post Punk/Synth-pop from the 80s.

The album opens with my 3rd favorite OMD song, So In Love.  The best, followed shortly by Secret, one of my top 10 OMD songs.  The rest of the album plays terrifically, keeping with a lot of their warm yet experimental songs, and does it without becoming boring. As Architecture & Morality was developing OMD's definitive sound, Crush finds them in their writing prime, fully comfortable with the style they'd created for themselves.

Also, OMD has a way with the saxophone that makes it sound as acceptable today as it did back then.  Usually I cringe when a band whips out the sax and starts tooting away.  Not OMD.  It's perfect.

Email ThisBlogThis!Share to TwitterShare to FacebookShare to Pinterest
Labels: 1985, Crush, OMD, Orchestral Manoeuvres in the Dark