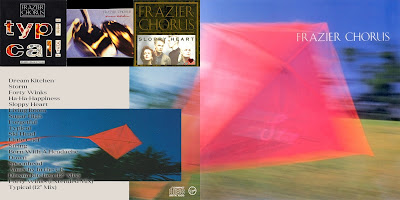 SO, is this Indie Pop or is this Synthpop or can it be categorized at all?  I hear bits of both, plus some Jazz, and remnants of 80s Pop...  What is it?

As I've said in their previous post, Ray , I really took a liking to this band, enough to name the blog after a line from one of their songs.  This album really does remind me of an 80s leftover, that set the stage for the 90s Britpop scene.  The good thing is, is that it makes me feel good...  It's mellow, relaxing, a little happy and a little sad.  It's a solid balance of emotion without being boring.  Best track is Sloppy Heart.  Reminds me of Dream Academy a little.  I also really like their cover of Anarchy In the UK.

Wikipedia -
Frazier Chorus were a pop group from Brighton, England. A pop group without the usual guitarist, bassist or drummer; they instead utilized flute, clarinet, bongos and hushed vocals.  Originally a four-piece, they signed to British indie record label 4AD and released the single "Sloppy Heart" in 1987. Shortly afterwards they moved to Virgin Records, and achieved reasonable chart success with a string of melodic pop songs about Dream Kitchens, Living Rooms, Happy Eaters and Little Chefs, all taken from their 1989 debut album, Sue.

As I began compiling and arranging all of the tracks, I realized after I had finished that my version is identical to the 2008 re-issue, only the b-sides were arranged differently at the end.  So, if you already have the 2008 version, you aren't missing anything, that's all of it.  Regardless, I still think I have a much neater cover.