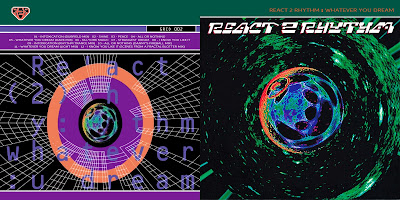 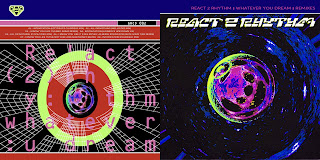 This album followed the exact same history with the Guerilla Label and with me as the previous DOP album, so I am literally cutting and pasting my last entry for this album as well.........


William Orbit started his own dance label in the early 90s called Guerilla Records that produced and released House music.  Along with his own band of Bass~O~Matic, there were a variety of other bands including this one, React 2 Rhythm.  Although nothing super special about the release, I had listened to it a lot as I was a fan of William Orbit, and I loved the cover art.
I once had a great copy of this on CD.  In the early 2000s, I traded it in to a CD store for hard fast cash.  Now, I kick myself for letting it go.  All I have now is the tracks downloaded individually from a variety of sources.  Some are CD rips, there are also some vinyl rips in there, as well.  That being said, the best way to listen to these tracks would be to burn them on disc and have your burning program normalize all the tracks to one level.  Otherwise, you'll get a loud one and a quiet one, and it will piss you off.
If anyone can get me a hard, normalized rip of the original disc, I would forever be in your debt.

Email ThisBlogThis!Share to TwitterShare to FacebookShare to Pinterest
Labels: 1992, React 2 Rhythm, Whatever You Dream