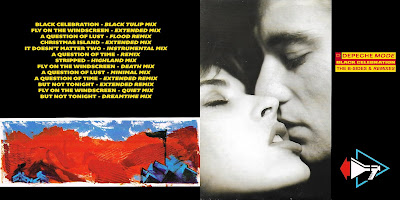 The first Depeche Mode album I ever bought was Music For the Masses.  Then I bought Martin Gore's first Counterfeit EP.  Then it was A Broken Frame, then Some Great Reward, THEN Black Celebration... followed a very short time later by the Personal Jesus single right before Violator came out.  So, that's the order I heard their music.  When you do it that way, you start to compare their progression as a band, and it's easier to see where they were then, and where they are now.  A Black Celebration was a unique one for me, and it's one I really think was a turning point for their sound. Was it Martin's turmoiled relationship that affected it?  Who knows.  But I feel that starting with this album, their music took a dramatic turn darker than their previous albums.

It's unfortunate that the two "unreleased tracks" Violence and I Feel No Guilt weren't actually DM songs, as the b-sides for the actual album were minimal.  The best of the additional material for this album was the remixes, which is what I've compiled here.  I know that I've left a couple mixes out (didn't I say that with INXS yesterday?) but I think the ones I've put on here are the best.  With the exception of the exceptional Dreamtime Mix of But Not Tonight, these are all official remixes.  Flood's mixes are obviously the best, but all of them really hit the mark.  This is a wonderful companion disc to the original album...  Good stuff!