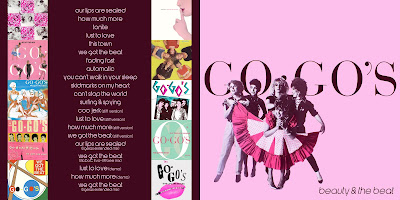 So, I've had this one ready to go for about 5 weeks now, and as I post it, I still can't believe I decided to make this post.  I know that I've had a secret crush on Belinda Carlisle ever since I was a kid, but that doesn't excuse me from posting something like this.

Maybe, it's because they started off as a Power Pop/Pseudo-Punk band with a little bit of swagger.  Maybe it's because they were initially picked up by Stiff Records.  Maybe because deep down in the sub-tricuspidal regions of my heart I might actually like listening to this music sometimes.  I don't know.  We'll have to see about that.

I do know that it's rather difficult to piece together an early 80s compilation without including at least one Go-Gos song.  Especially Our Lips Are Sealed.  Even McDoc the remix maestro took the effort to remix one of their songs.  So, at least it's not just me.

My sister used to have this tape, and when she'd play it, we'd make fun of the song Skidmarks On My Heart, and call it "Skidmarks From A Fart".  I think that version sounds better.  Don't you?

Regardless, after using the promo-art from their first album and changing up the font for the title and the songs, I think the cover looks spectacular.  This is one of my favorites, and I don't even like pink.

Email ThisBlogThis!Share to TwitterShare to FacebookShare to Pinterest
Labels: 1981, Beauty & the Beat, Go-Go's