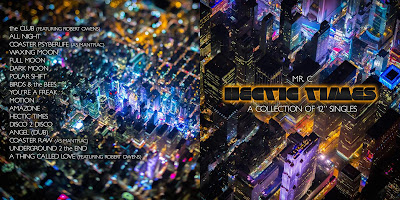 I can't remember a time during my "Techno" years when I didn't listen to the Shamen.  I liked them so much, my love for them carried on throughout the 90s, and well into today.  It's unfortunate they went the route that they did, and eventually dissolved, because if they were still making music today, I would still be listening to it.

I understand the problems they had with their label and with the public and with their producers.  They were pushed into a style that I'm sure wasn't right for the direction they wanted to go.  And I know that a lot of people dismissed them as bubble-gum pop and trendy, which they were.  But, I didn't care.  I loved them anyway.  I loved their sound, their style, their subject matter, their remixes (Beatmasters rock), all of it.  But, I really listened to hear the rapping of Mr C.  He was incredible.

As you are all well aware, Shamen's last album really sucked bad.  It was a cataclysmic disappointment for me.  I still continued to follow Mr. C, though.  His work beyond the Shamen has proven to be quite mature, relevant and appealing.  His albums weren't too bad, but it was his singles that really showcased his talent.

Listening to these once again, I can still hear remnants of the Shamen tucked down into the melodies of the tracks.  I can still hear some of the same bleeps and bloops that made the Shamen so fantastic.  I can also hear his own style growing and turning into something all it's own and more.  If the Shamen were still working together, I think that this is what they would sound like, and I wish it were still the case.  But, alas, this is as close as we'll get.  It's enough, though.

He never had any cover art for his singles, so I took these tilt-shift pics of NYC and laid some cool font effects over the top.  Hectic Times is the title to twelfth track in this comp, and it suits the comp well.  I know it's not from the era of early Techno, but it still holds a lot of the same heart that it did back then.

Thanks, Mr C!  You're definitely the Main Geezer!