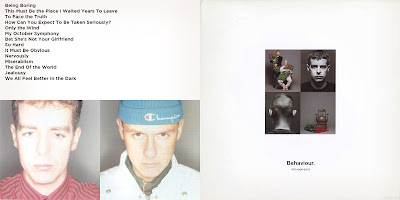 This was actually the first PSB album I ever purchased.  I did it at the behest of my best friend, who said it was the BEST ALBUM EVER.  Only knowing the few tracks (that now make up their Discography compilation disc), I bought it with high expectations, even though I wasn't really the biggest fan at the time.

I'm sorry.  This album was a bummer the first time I listened to it.  In fact, I only listened to it a couple times before I filed it away as a waste of money.  Can you believe it?

So, then Discography came out, and I got that, and enjoyed it.  Then Very came out, and I was fixed.  THEN, the chain record store in the mall (it's name was 3 letters, I can't remember what it was called...) and they kept getting in all of these sleeved singles (from a variety of groups, but) of the PSB material from West End Girls all the way through Behavior.  Suddenly, I had almost two dozen PSB CD singles, and I knew that I was in it for the long haul.  I finally found Very Relentless at that same record store, and I was in seventh heaven.

After getting all these singles, I decided to go back and actually listen to all of their previous albums, including Behavior.  It was as if my eyes had suddenly been opened, and I was hearing it for the very first time.  With the mixes and the b-sides, I found this album to be essential PSB material from beginning to end.  It's not my favorite PSB album, but it is one of their albums that you must include if you are talking about the volume of their work.

On my version, all of the b-sides are included.  I added in Miserablism, as this is where it rightfully belongs.  I also replaced the two songs with excessively long names with versions that I found preferable to the album mixes.  I had made this cover probably 3 years ago, without knowing I was going to eventually post it, so the versions I replaced aren't noted on the cover, unfortunately.  The track files are, though, so if you don't like the mixes I put in the set, you can easily replace them with the originals without fucking up the album art.

I have a disc of remixes that I've aptly entitled "Excellent Behavior", but I haven't made a cover for it yet.  I dropped it in a folder for Feb 14th, so you'll get it then.  Until that time, enjoy this wonderful album!