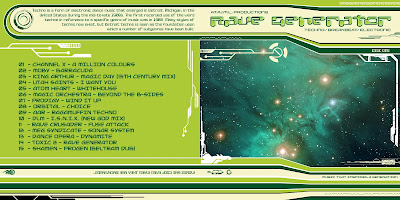 I've tried hard these past couple of months in preparation of this, to remember when I first heard "Techno".  I had always been a fan of remixes from various bands and artists, and the more synths and beats they added, the better.  I would see names on discs, of mixers that I liked, and try and find other material by them.  This might be where I got some of my interests and inclinations.  I do know that by the time I purchased Moby's first album and the Shamen's En-Tact, I was pretty much into it.  I remember picking up compilation after compilation of artists on discs by Network and XL.  I remember actively seeking out as many different vinyl singles as I could lay my hands on.  BUT, I don't really remember when I started saying "I listen to Techno" or "This is Techno".

It always amazed me the number of artists that suddenly sprung up in the early 90s.  Thousands of new bands, labels, artists and individuals.  Funny thing is, when you research it, there were a lot of individuals who would release work under dozens of different monikers.  I remember once buying a compilation with two discs and 25 songs, supposedly by 25 different bands.  Once I did my research, I realized that only 3 different INDIVIDUALS actually made all of the music.  Crazy.

As time went by, I gravitated more toward the album-oriented groups, like Shamen, Prodigy and Moby at first, but then adding on Underworld, Orb, Orbital, and Chemical Brothers.  I still prefer that.  The one-off singles by unknowns have become a thing of the past, to me.  SO MUCH of the Electronica genre sounds so similar and so repetitive, it's hard to find any creativity left in any of it.

But, there are still a few songs out there from my past that I remember and love,  some of it good, some of it shitty, most of it dated and corny.  This should be a fun week, and I hope that there are some of you out there that still remember it fondly.  I was in college at the time, so I look back on it as a time of self-discovery and independence.  Back then, I was one of the many kids on campus walking from class to class with my sunglasses and some big fucking fat headphones on, jamming away in my own little electro-world.

As for the classification of what is or is not Techno, let's explore the many sub-genres, shall we?  Techno. Jungle. Tribal. Drum & Bass. House.  Hardcore/Hardstyle. Hi-NRG. Trance. Dub. Ambient. Breakbeat.  Did I miss any?  Probably.  But, who cares?  I think that after 1988, Detroit Techno and House influenced rock music permanently and forever.  Even the stalwarts of "our type" of music couldn't avoid it.  Erasure and Pet Shop Boys most definitely succumbed to it, and I also believe that it caused the death of New Order.  So, as far as people deciding whether or not something is or isn't Techno, is an irrelevant point.  Anything released after 1993 that used synthesizers or keyboards in a dance style manner can be considered in one form or another to be or be influenced by Techno.

Anyone disagree?  Thoughts and opinions are definitely encouraged.

So, this week you are going to see some albums and compilations of some great artists.  But, I wanted to start with a double-disc set of one-off tracks that really stand out in my mind from when I listened to this genre of music religiously.  These were often in regular circulation on my stereo when I was in college, along with hundreds of others.  Although the cover is 100% original, with the exception of the photo, it was definitely influenced by the compilations of the time, mostly by React (another fucking fantastic label).  I wanted a traditional early 90s feel, and I think I got it.  Let me know what you think... 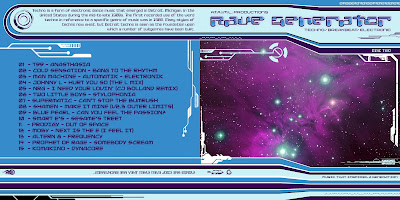