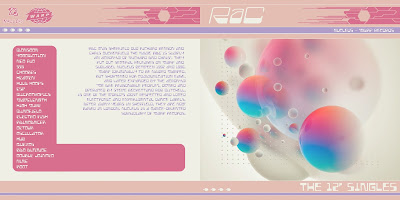 I wrote about the history on the back of the sleeve I made for these guys.  They didn't have much if anything for graphics for any of their singles, so I created my own, and tried to keep it in the style of the early 90s Techno albums.

Richard and Chris were an awesome duo who released quite a few singles on the Nucleus and Warp labels.  When I was actively collecting vinyl in the 90s, I had three of these singles, and really took a liking to their style.  But, as I've said in previous posts, when my interest in that early 90s stuff started to wane, I ended up selling them all in a large stack of vinyl that I had taken to a record store in the late 90s.  Back then, though, I was moving around a lot, so hauling close to 8000 comic books, 600-700 action figures, 400 novels - hardcover & paperback, 3000 CDs and close to 800 records became quite a chore.  Hobbies can sometimes be a burden.  SO, I sold them off.  (funny now that I talk about it, I have close to 80,000 comics, 25,000 albums and 3-4000 novels all on 3 external hard drives.  My, how things change!)

Now, I never had all of their stuff, just those 3 singles.  So, while compiling their material from Nucleus and Warp, I've found a lot of stuff I'd never even heard before now.  As I listened to it while making the cover, and as I listen to it now, I'm sure that I will get a lot of airplay out of it.  It brings back some great memories, and is very digestible even now.  THIS was the style of Techno that I really enjoyed back then.  Minimal vocals, lots of beats, and a real lack of that Soul/Hip Hop/R&B sound that a lot of the Techno had back then.  I can't stand the Techno that has all that stuff.  Drives me nuts.

Again, as I collected these singles together for one disc, I came across a lot of material I'd never heard before.  And not just from RAC, but from a lot of other Techno outfits as well.  I'll probably be making more of these artist comps in the future, if you guys like them.  And if you don't, well, I might just make them anyway because they're a lot of fun to put together.

Email ThisBlogThis!Share to TwitterShare to FacebookShare to Pinterest
Labels: 1992, 1993, 1994, RaC