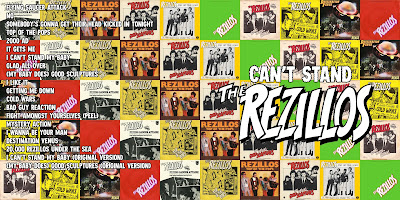 "The Rezillos are a punk/new wave band formed in Edinburgh, Scotland, in 1976. Although emerging at the same time as other bands in the punk rock movement, the Rezillos did not share the nihilism or social commentary of their contemporaries, but instead took a more light-hearted approach to their songs, preferring to describe themselves at the time as "a New Wave beat group".[1] Their songs are heavily influenced by 1950s rock and roll, 1960s English beat music and garage rock, early 1970s glam rock, and recurring lyrical themes of science fiction and B movies, influences that mirrored those of US bands the Cramps, the B-52s, and X who were starting out at the same time. The Rezillos' biggest hit in their home country was the UK Top 20 single "Top of the Pops" in 1978, but they are best known outside the UK for their cover version of "Somebody's Gonna Get Their Head Kicked In Tonight", which featured on the soundtrack to Jackass: The Movie in 2002. Since the Rezillos recorded it, the song has been covered by other punk bands, including Youth Brigade and Murphy's Law.
Released in July 1978, the Rezillos' first studio album Can't Stand the Rezillos is now considered a classic album of the first wave of British punk, but the group split up four months after its release, following internal arguments about their future direction. After the Rezillos split the band's guitarist and principal songwriter Jo Callis briefly joined a couple of unsuccessful Edinburgh post-punk groups, before being invited to join The Human League. He went on to co-write some of The Human League's best known songs during their most successful period, including their biggest worldwide hit, "Don't You Want Me". The Rezillos' vocalists Eugene Reynolds and Fay Fife formed the Revillos, a group with an ever-changing line-up that continued where the Rezillos left off. The Revillos split up in 1985, briefly reforming in 1994 for a tour of Japan, and again in 1996 for a UK tour. In 2001 the Rezillos reformed after being invited to play at Edinburgh's Hogmanay celebrations, and have continued to play live ever since, as well as releasing new singles occasionally."

I chose to do it this way tonight, as I don't have a personal connection to the album other than I think it's a great album and essential to any punk collection.

Plus, my wife and I are still switching our family rooms and living rooms around.  We've got furniture, electronics, pillows, dishes and kitchen furniture everywhere.  I can't find my kitchen counter right now to make supper.  And, I'm lucky that I was even able to get my computer hooked up to post this.  So, now that it's up, time to go back to work, before the work week.

The things we do to prepare for Christmas.....