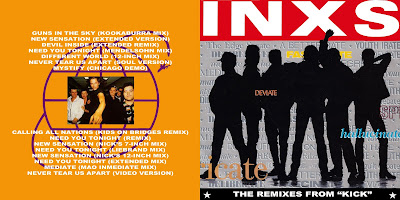 My original post for the Kick album can be found way back HERE.  You can read that to find out exactly what that album means to me when I listen to it.  A pure teen-angst melodrama that left it's marks on my soul for life.  After reading all my posts about loves lost, I begin to wonder if my whole life has been one continuous chain of longing and pining for women that left me hanging due to my own inability to act on my feelings.  I let them come and go without so much as a fight.  It's a wonder how I ever found my wife and kept her long enough to marry me....  But, I digress.

I saw these guys the summer of 1988 in Chicago with a bunch of friends from work.  It was an indoor show, but still packed out about 20-30,000 screaming people.  It was the second time in my sheltered life that I saw (and smelled) people smoking pot in public, and I was more surprised to see that no one cared about it, too. (The first time was the Def Leppard concert, but I was too ignorant to know what it was, what it smelled like.  I thought it was just cigarettes...)

It was a great show, although I didn't know half the songs because I only knew this album.  I had a blast, anyway.  I had been to Def Leppard's Hysteria tour earlier that summer, but this time was probably the best.  The kids I was with were hyped, and the crowd seemed really upbeat, compared with the headbangers at the Leppard concert.  Everyone was having a great time.

After the show, we tried to go downtown and eat at Ed Debevic's Restaurant, but by the time we made it there, the place had closed, as it was shortly after midnight.  Big dummies that we were, we fucked around downtown until about 230am before the cops chased us down and threatened to bring us in for breaking curfew.  We were lucky no one tried to jump us being young and foolish in a big city.

I don't think we actually got back to my friend's house until about 430 or 5am.  Fortunately, his parents weren't as strict and controlling as mine, so staying out all night wasn't a big deal to them.  I had told my parents I was spending the night at his house after the show, had they known I was out so late in the city, they would've flipped out.

That next week I sported my kick-ass (no pun intended) concert t-shirt.  I loved that shirt so much.  I still own it today, and would love to wear it.  Alas, I weigh about 100lbs more now than I did then, so I look like a big, misshapen bag of mashed potatoes if I try and wear it.  And, I don't want to stretch it out and ruin it.  I've seen it on ebay a couple times going for about 200.00, but I don't think I could ever part with it.

Not all the mixes are on here.  I filled up one disc, and pitched the worst.  If you're looking for any that aren't on this set, let me know, and I'll see if I can get them to you.

In March I'm planning to do a "Live Week", and I have a recording of one of their shows from this album.  I'll be posting that, then....