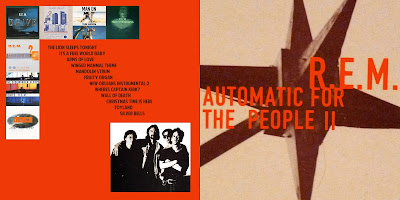 And now for something completely different...  Talk about a change of gears, I took it from 3rd gear and slammed it into reverse.

No need for extensive posts on this one, we all know who REM is, and what Automatic For the People was in their career.  Quite honestly, their best album ever, backed by what would become a fast slide into mediocrity.  In fact, I may have been satisfied with mediocrity, but the rest of their catalog from here on out was crap, as far as I'm concerned.  It's unfortunate, really, that they got as big as they did.  It's when they became gods that they hit that peak and started into irrelevancy.  I saw their Monster tour, and I must say that I walked away feeling as if they sold out.

I do remember being thrilled when this one came out.  I got it the same time I got Enya's Shepard's Moon album, and I think also Suzanne Vega's 99.9 album....

This toasty collection brings together all of the b-sides, fan club tracks, and unreleased material from the AFtP sessions.  I decided to post it this week, as it has a few Christmas tracks on it that you all should like.

I never really did get into their instrumentals, though.  They seemed incomplete and half-baked.  I couldn't feel any heart in them.  Makes you wonder what sort of role Stipe's voice played in making sure their songs exuded passion and emotion.

Email ThisBlogThis!Share to TwitterShare to FacebookShare to Pinterest
Labels: 1992, Automatic For the People, REM