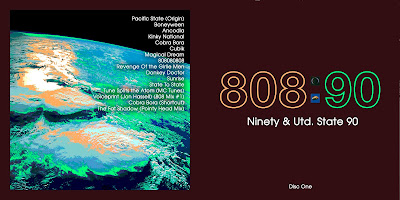 I discovered and fell in love with 808 when I purchased their Ex:El album in1991.  I had to have it once I heard the Bernard Sumner guest vocals on it.  As I listened to the album, learned the history behind the band and it's association with this new music called Techno, I soon became an avid follower, buying all the vinyl I could of their releases.

From Discogs -
Manchester’s techno pioneers were formed in 1988 when Martin Price, owner of the city’s seminal Eastern Bloc underground record store, teamed up with Graham Massey, formerly of Factory Records’ Biting Tongues and more recently renowned as a producer. The debut EP, Newbuild was cut in collaboration with fellow Mancunian Gerald Simpson. The trio were also responsible for mixing tracks for local artists, including Inspiral Carpets. In 1989 Simpson departed to launch his own vehicle, A Guy Called Gerald, and DJ duo the Spinmasters (Andrew Barker and Darren Partington) were drafted into 808 State.
The new quartet cut the Quadrastate EP, a huge club hit, and the single Pacific which crossed over into the national top ten at the tail end of 1989. The timing of their rise to prominence worked in their favour, as the Madchester explosion began dominating the UK music and style press. 808 State were cast alongside the likes of the Stone Roses and Happy Mondays which aroused interest from the rock world and broke down barriers between the indie and dance factions. 808 State signed to ZTT in 1990 and delivered the classic 808:90, which was immediately adopted by the rave generation as a soundtrack to post-gig chill out sessions, as well as becoming a favourite with DJs and rock concert audiences.

Ninety is the second full-length album and first on ZTT Records by British electronic music group 808 State, released in 1989 and featuring the single "Pacific State" which reached number 10 in the UK Singles Chart on November 1989. It was released in the US as Utd. State 90, without "The Fat Shadow (Pointy Head Mix)," but with other bonus tracks.
Slant Magazine listed the album at number 54 on its list of the "Best Albums of the 1980s" saying "A thrilling expansion of the possibilities for acid house and arguably the best LP ever produced in the style".

For my version, I combined 90 and Utd State 90, plus the relevant mixes.  I additionally added the mixes that they did for other artists from the same time period.  I specifically left the Quadrastate tracks separate, as I will include those on my Newbuild version, along with the Blue Monday mix.  I tried to hold true to the art from the original album cover, while adding my own style.  I hope it looks legit...

I'll see you all tomorrow, back to normal. 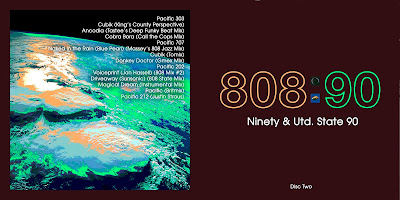