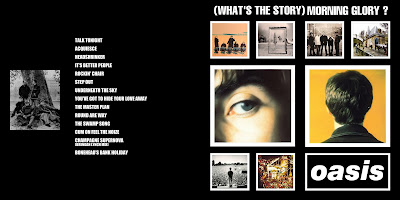 The first time I heard Oasis was Live Forever on a random music magazine's sampler disc.  I really couldn't stand it, as it was a very whiny annoying song.  I wrote them off as just another band, and went on my way.

After a while, I started hearing a lot about them.  People were talking.  I continued to resist because now I just thought they were trendy.  Oh, the trendy thing to do, let's all like Oasis.  Whatever.  I mean, who the hell names their band Oasis?  What a dumbass name.

Then, Morning Glory came out, and I have to admit I was interested.  I still hadn't heard any music by them, but there was definite hype surrounding them.  The little rivalry between them and Blur had popped up, and I was still, personally more interested in Blur (even though they had also gone that nasally whiny Britrock style, too)  When the little competition between their singles happened, and Oasis won, I finally broke down and bought their album.

Mind you, all this time, the only thing I had heard by Oasis was that one song, Live Forever.  That was it.  So, when I bought the album, and played it through, by the end of it I was dumbstruck, shellshocked, bowled-over by the absolute magnificence of this album.  It is TRULY LEGENDARY, and will be for a very long time.  If they don't get inducted into the R&R Hall of Fame for this album alone, I would be absolutely shocked.

The best part about the release of this album was the singles and all of their b-sides.  That is what I've compiled here, as Disc Two of the (WTS)MG? album.  All the b-sides in one spot as not just a companion to the original release, but equally part of the album.  I feel that a lot of the tracks on the b-sides were better than album tracks.

My wife and I, before we got married, took a little vacation in Chicago for 3-4 days one autumn, shortly after the release of this album.  To cruise through the streets of such a magnificent city, listening to Morning Glory and Champagne Supernova back-to-back, is quite exhilarating.  Music rocking, one hand on the wheel, the other holding her hand.  Love Love Love.

I still think Oasis is a stupid band name.