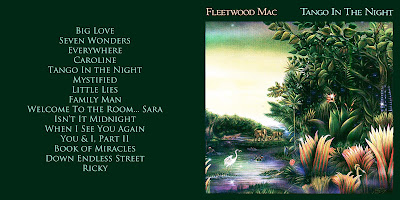 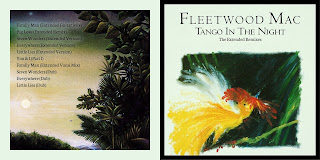 So, I blame this one on my parents.  I'm busy listening to Duran2, Cure, New Order, Punk, Hard Rock, 80s Synth, Post Punk, EVERYTHING, but late Classic Rock/Adult Contemporary.  In my wildest dreams, I would've never listened to an album like this, let alone own one.  But, as a teen still living with my folks, a lot of the time I was forced to listen to their music (sorta like I do to my kids now) and they both thought this was a pretty good album when it came out.  For the longest time, I thought it was a 70s album, being ignorant of Fleetwood Mac in general.  Why would I bother to know the facts?

So, several years back, I got nostalgic for this album.  Remembering my parents listening to it, and I recalled a lot of the tunes.  To learn it actually was an 80s album was somewhat shocking to me.  I thought most of them were dead by then or something (even now, none of them are dead.  Stupid, stupid man)  To also learn, while searching for the b-side material, that there were remixes of their songs was even more surprising.

The b-side songs and remixes are rather meh.  But, if you are a completist, it doesn't matter.  I'm pretty sure I have it all here.  There might be a remix or two that didn't make the cut, I can't remember.  But, there's more than enough here to make you feel like you've had enough by the time the disc is done.

It IS solid material, just not always my style.  As I said, it's a nostalgia thing.  But, to each his own, some of you may absolutely love this one....

Email ThisBlogThis!Share to TwitterShare to FacebookShare to Pinterest
Labels: 1987, Fleetwood Mac, Tango In the Night