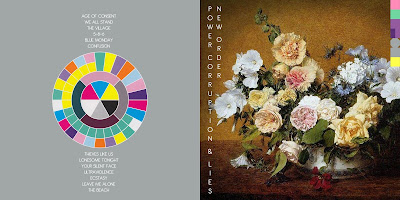 I know I just posted New Order a couple days ago, but I felt compelled to post this one, now.  Don't know why, I just had to.  Obsessive Compulsive.

To me, this was New Order as professional, mature artists.  I thought this, having only started listening to NO with Substance, and reflecting back on the material they had already released.  I thought it was very well written, tame and un-risky.  Little did I know.  Now, looking back, I still see this album as an artistic example of professionalism and maturity, but I also see this album setting a gold standard for bands before and after to be measured by.  Every track is a classic Post Punk song.

Surprisingly, this is not my favorite NO album, though.  I still see Technique as their BEST album.  But, this one comes in...  I think third?  Not bad, considering.

I did what was right and had to be done by squeezing Confusion, Thieves Like Us and Lonesome Tonight on here, as it's almost a requirement.  This is where those songs belong.  Maybe, one day, I'll make a remix disc for this one.

One reason why I am not a huge fan of this album centers on Blue Monday.  YES, I respect the fact that most Techno, House and Electronica are influenced by it.  Yes, it was the #1 selling 12-single for many years.  Yes, it is a great song.  BUT, it is by far the most overplayed and worn out New Order song in existance (followed closely by Bizarre Love Triangle.)  I have heard Blue Monday played SO MANY times, I would choke someone if I hear it again.