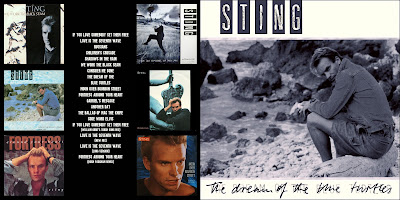 I didn't fall in love with Sting's work until Nothing Like the Sun.  That being said, I still really liked a lot of the singles from this album, and after I started really paying attention to him, I learned what a wonderfully written album this truly was.

When I was a kid (13 or so?) I remember seeing the If You Love Somebody video on MTV and enjoying it and the unique way in which they shot it (check it here).  Were they actually in that room or not?  And William Orbit's mix is awesome.  I heard Russians on the radio (I remember driving from the suburbs into Chicago and it played) and it was great, it was sad and beautiful and perfectly captured the essence of the 80s political stage.  To this day, I still think that Fortress Around Your Heart is one of the best songs he's ever written.  It is a cathartic pop hook that helped me sort through several relationships.  And Seventh Wave is a clever balance between objective happiness and nihilism.

One track I had never heard before until I compiled this collection is Code Word Elvis.  It is stupid and silly, but it's supposed to be.  In fact, it's hilarious.

I'm not going to say that Sting wrote his best work when he went solo, but damn near close.  If it weren't for Synchronicity, it would be a definite yes.

Email ThisBlogThis!Share to TwitterShare to FacebookShare to Pinterest
Labels: 1985, Dream Of the Blue Turtles, Sting