Everything But the Girl - Walking Wounded - 1996 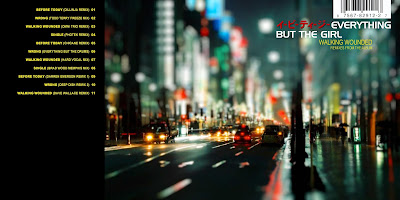 My wife and I had been married about 6 months when this album came out in the winter of 1996.  We had gone to Blockbuster Music (remember that?!) and she had listened to it at the listening station and decided to buy it.  I thought it sounded alright, but it was more her than me.  Just like the Bjork Post album, after repeated listening in the car, I fell in love with it.

Unfortunately, the album doesn't have any b-sides, but there are a host of mixes.  I put the best on here, enough to fill up a disc, and slapped a nifty new cover on it using a random "tilt shift" picture from the internet.  I think I hit the nail on the head with it.

At the time, Drum n' Bass hadn't hit full swing, so I wasn't overtired of hearing it.  In fact, it was so new to me, I really enjoyed the sound of it, and found a lot of these mixes to be better than the album.

I will eventually post mixes from Temperamental, but it's unfortunate that after that they split and their solo work has been less than good.  In fact, it's been rather lackluster and boring.

Regardless, their shift to Electronica was a smart move and it made an extremely bright moment in their musical careers.

Email ThisBlogThis!Share to TwitterShare to FacebookShare to Pinterest
Labels: 1996, Everything But the Girl, Walking Wounded