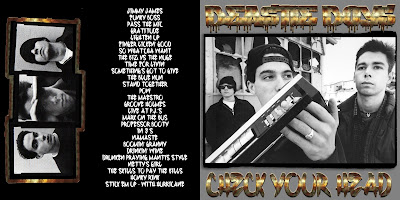 Day two of Pop Music Week, and I can tell this week is probably going to be a bust.  BUT, we only have a few days more to deal with, and you MIGHT find something that you like here....

During the 80s, I loved (as did everyone else) the Beastie album Licensed to Ill.  A wonderful little piece of shit that was always a pleasure to listen to.  When Paul's Boutique came out, there was very little fanfare, and I was too busy listening to Madchester, Duran2, Cure, DM, New Order, Erasure, you know...  the likes of this blog.

There was a rumor shortly before this album came out that either the Boys had broken up, or one of them died or something, so seeing Check Your Head on the shelf at the Music store was something of a shock.  Wow.  Hmmm, interesting cover, Parental Advisory sticker, looks a little mainstream Rap to me...  What the hell, I might as well give it a try.  What do I have to lose?

So, I bought it.  The first listen, I was really taken aback by the change in style.  It was nothing like Licensed, and it wasn't really Rap.  There was a lot of Punk in it, and Funk and a lot of something new.  This album showed a real growth and maturity in their material.  The first listen impressed me, but I wasn't really loving it.  I appreciated it, and thought that they really showed some talent, but that was it.

I'm not going to sit here and tell you that I had some sort of overwhelming apifany that made me fall in love with the album.  I haven't.  I have learned to appreciate it a great deal, and I enjoy listening to it now and then.  It is a different aspect of my musical tastes that I sometimes like to sample.  It's an album that I consider very worthwhile and an expertly crafted set of tracks.

So, here you have the album and all the b-sides.  A nice little set.  I didn't HAVE to change the cover, but I did, and had some fun with my Photoshop styles on the fonts.

If you haven't listen to this album in a while, try it again.  It's a fun listen and you'll be satisfied with the time spent...