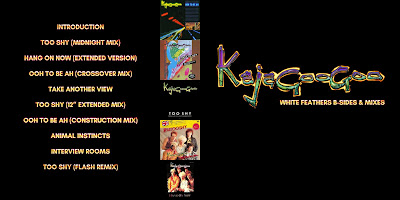 I've only ever cared about their Too Shy single, but all said, they aren't THAT bad.  I think they may have had something, and possibly could have gone further had they studied under Nick Rhodes tutelage just a bit longer.  The album itself shows some definite potential, but it seemed a bit rushed and forced.  But, as always, I've been hooked on their extended mixes and b-sides, where I think a lot of the best material lies.

Maybe it's just me, though.  Maybe, I see the album as something to be expected, while the b-sides and mixes are those little extra gems that you have to work for, search for, more rewarding to find.  This isn't just the case with Kaja, here.  I think I feel this way about almost every and any artist.  You don't know how disappointed I am when I pick up a single or go to download a new single, and there isn't a remix or a non-album b-side included.  KISS has sold a billion albums, but I don't think they have a single b-side that isn't already on an album.  Bullshit.  What sucks, too, is now that artists are releasing digital singles, it's generally just the one track, that's it.  Now that REALLY pisses me off.

I digress, but it's because I didn't have a whole lot to say about this one.  I like it, it's fun, and it was some extra tunes to mix into my playlist in my bedroom late at night doing my homework.  The rest of their material was marginal compared to this, and even this one can barely stand on it's own.  But, this little disc will roll in and complete your White Feathers set just nice.  It includes that lovely Dodi fanmix that is great, and I had a hell of a time trying to make that logo on the cover look dynamic enough.  I may have pulled it off, though...

SO, what are the words?  Are they