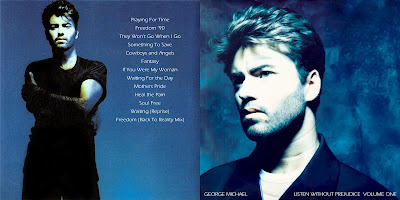 Already a fan of Faith, and disappointed with Duran's release that year, I followed the anticipation hype of Listen Without Prejudice and snatched it up rather quickly.  Upon first listen, I really liked it and found his growth and development of style would soon lead him into other avenues of music (even some I didn't care for)

There are a lot of songs on this album that I take rather personally.  George wanted to be taken seriously as a songwriter, and the music and lyric really reflect that.  Even though it wasn't as successful as Faith, the songs on Listen are by far superior, and I often pull this disc out at night, whether on the road or in my house, and listen to it in the darkness.  The music, to me pulls at heart strings and soul chords.

I probably could've included the four tracks that were supposed to be for Listen Vol II, but, as it is, the album, two b-sides and one remix seem to be enough.

I always thought the original cover was stupid, so, again, the single sleeves remain king, and throw a unique light on the album like this.