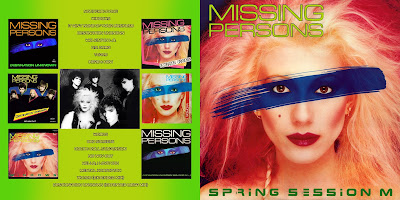 AND I AM BACK.  Hopefully we won't have a break like that again, for a while!!!!

Some of the most classic New Wave tracks out there are on this album.  Destination Unknown, Words, Walking In LA, and even an interesting cover of Hello, I Love You.

Obviously, I was probably too young to know or pay attention to these guys in their heyday, but as I learned more about Warren Coocooroolow (sic), and took a greater interest in 80s music in general, Missing Persons kept rising to the top.  Whenever I make an 80s comp for the car or for a trip, there's always a MP track on it.

But, that's all I'm saying for today.  I have missed my family and I made a 5 hour trip in just under 4 (fast baby, fast! And piss in a water bottle instead of stopping!)  I'm going to play with my son, who I bought an Optimus Prime costume for, and watch all four episodes of Better Late Than Never (It's funny but worthless)

I'll be here tomorrow with two albums that I'm sure you'll like.  Until then...