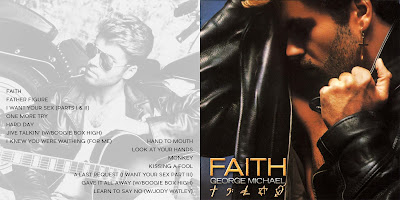 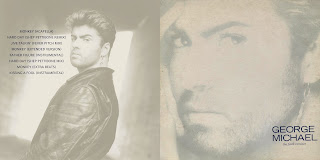 Obviously, my little sister was the one who first got interested in George Michael.  Also, one of my best friends was a big Wham! fan as well.  I simply dismissed it.  But, back then when I did listen to the radio, I heard a lot of this album, while I was waiting for music I DID want to hear (Inxs, Duran2, Wang Chung, etc).  It didn't take long before I started to really like what I heard, and soon George became a figure that I was interested in hearing more from.  The fact that Shep Pettibone did several of his mixes made it even that more enticing.

Back then, I was hooked on Father Figure (hot model in the video), Hard Day and Kissing a Fool.  Later, I quickly added his cover of Jive Talkin' with Boogie Box High and his duet with Aretha, I Knew You Were Waiting For Me.  For the album disc, I also added his song with Jody Watley and another Boogie Box High track (that really sucks, IMHO)

As far as the mix disc goes, there aren't any surprises on it.  All of the single mixes, including the remix that was on the album.  It surprises me that there weren't any actual remixes of I Want Your Sex, just those three versions.  You would've thought that a IWYS single would have an extended mix of Part I.  Guess not.