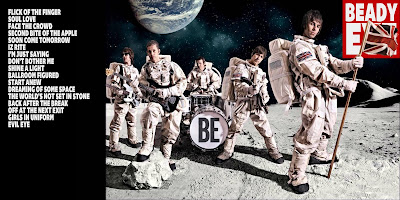 When this album came out, it annoyed me that they had to use a nude woman on the front cover.  Don't get me wrong, I like women and I don't have a problem with sensual things.  But straight up nudity really has no place on an album cover.  There are plenty of other ways to portray sexiness.

This was a pic from an article about Beady Eye's new album.  I thought it was a fabulous pic, very unique and really cool.  I had to use it.

I've got the album and the b-sides here.  I didn't make a cover for 42 42, but I'll upload that here, anyway.  As always, it's another great album from one of the Gallagher brothers.  In fact, this one is better than Noel's album.  I think Noel has written all the songs he has in him.  There doesn't seem to be much left in him.  Liam, on the other hand, is sparkling.  Edgy and poignant as ever, pop hooks galore.  A great peice.

On a side note, Heavy Metal Week is coming up on Monday.  So, either get your air guitars out, or plug your ears.  You decide.
Posted by Unknown at 4:04 PM