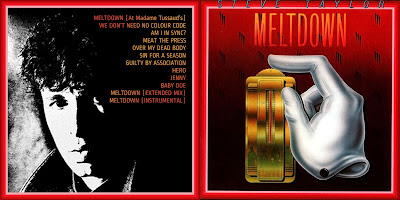 Something of a novelty of the early to mid 80s, Steve Taylor was a staple for my youth, being naive and impressionable from neat middle class suburban life.  He falls somewhere between New Wave and Synthpop, but definitely a Contemporary Christian Artist (contemporary for the 80s).  There, I said it.  He's a Christian artist. Thing about it, the songs are full of pop hooks, and the songs aren't bad.  But, it is very whitebread and preachy.

When my parents took away my music from 84 to 86, I didn't have a whole lot to choose from that was acceptable to them.  He happened to fall into the category that they would approve.  And I needed my music.  I spent a lot of time at church, then, and I was introduced to ST, along with a slew of other Christian bands (Petra, DA, Rez Band, Stryper, Servant).  In my art class in 7th grade, we spent a two week session learning how to use an airbrush with masking and stencil screens.  We were supposed to come up with a design and airbrush it on a t-shirt.  I did this cover for my project.  Best in the class even though no one knew who the hell he was.

You might find the album cute, you might disagree with his views, but wholly the album isn't bad, I still enjoy listening to it to remember my early teen years before I went rebellious.  (Maybe being forced to listen to this is what made me rebellious)

Songs that I still like are Meltdown, Am I In Sync?, Sin For Season, Hero and Baby Doe.  Other tracks that are still very relevant today include We Don't Need No Colour Code and Meat the Press.

Novelty and cheesy, it still has me singing along like I was 13 again.  Download it, listen to it, and if it's not your liking, delete it!