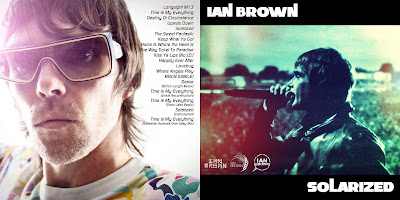 Upon reflection, this is probably my favorite Ian Brown album.  I didn't know it at the time, as I was still too busy listening to Golden Greats, and dismissing the Spheres album.  I listened to this one quite a bit, and liked it, not loving it unbelievable, just really enjoying it.  And, I'd listen to it over and over again, and put it away, then pull it out later and listen again and again.  Whenever I feel like listening to IB, this is the album I always go to.  And now, looking back, if I could only have one Ian Brown album, this would be the one.

What's awesome about this album is that the songs are all very different.  But, due to the style and sound of his vocals, it's enough to unify them all.  Right up front, he starts it with Longsight M13 backing right into Time Is My Everything.  Can they be any different?!  Even the notorious Keep What Ya Got, IB has taken an obvious Gallagher track and made it his own.  (I really would like to see a IB and NG duo/partner album.  I think it would kick fucking ass.)

Well, all the album tracks rock, the b-sides are killer, the Unkle song kicks ass, the Gusgus Vs remix is awesome, and the remixes are great.  What more can be said.

It's apparent as IB has aged, his production as declined.  As I've spoken before about aging heroes, I think IB has aged well, and I hope that he continues to make music for a long time.  Also as I've said before, I consider him to be the Godfather of British Rock, and I don't see anyone toppling him soon.  So, keep at it, chap!  Give us some MORE.  I'm a greedy piggy.