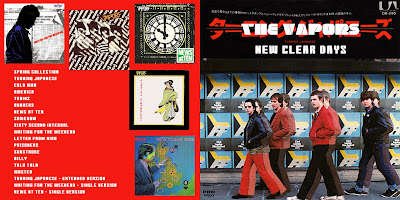 This album is my next entry in my "Pleasantly Surprised" posts.  I'm a big fan of the website "Oldies.com" because they reissue old and out-of-print music, similar to what I do, with mixes and b-sides.  Sometimes they back 2 albums up on one disc.  In 2004 they released both of the Vapors albums on one disc.  Of course, I said "What the Heck" and ordered it, not expecting much for 11.99.  At least I'd have one good song on there, Turning Japanese.

For those that don't know anything about the Vapors, they had two albums and six singles.  I would place them firmly in the New Wave category, but could also strongly be considered Power Pop, the first album moreso.  And, according to Discogs, they do have a link to the Jam, so would that also put a hint of Punk in there?

I put all the b-sides and remixes from their first album on this disc, and I clearly preferred the Japanese cover of Turning Japanese to the actual album cover.