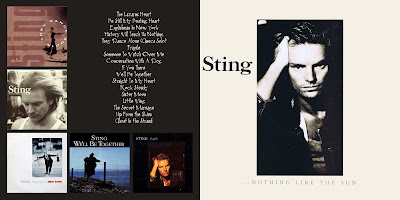 
This album was introduced to me by the same girl in High School who dogged me out for listening to INXS too much in gym class.  She loaned this tape to me (anything to get to talk to her again) and I fell in love with it.  I remember it was late October and I was taking the activity bus home from school.  Headphones on, listening to Englishman in New York while taking a ride through suburban Chicago on a dark evening.  Streets wet and cold, headlights reflecting from the surface.  Snow drifted, shovelled, pushed from the sidewalks and streets, all the trees barren of leaves, the ground white and dirty.  Be Still My Beating Heart.

A very mature sound, I strongly feel this is a Jazz album, but there are also some World elements in there as well.  I have all the b-sides put somewhere between the two side sets of the album, and also some at the end.  They are just as good as the album tracks.  I love every song here, with the exception of Rock Steady, which I think is a crap stupid song, and I'd cut it out of this set if it wouldn't betray the integrity of the collection.  That being said, I did have to edit about 15 seconds of the end of it just so I could fit all of the songs within that 80 minute CD barrier.

You really can't alter the power of the original album cover, so I didn't and left it the same.  If I had decided to change the album cover at all, it may have been replaced with BSMBH, as that pic sleeve is a great shot of Sting as well.

Enjoy, relax.  Sit back and drink a snifter of brandy and let your mind fall into Sting's masterpiece release, his last for the eighties....