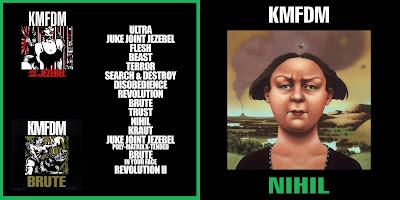 My first KMFDM album, I fell in love with the group for a lifetime.  Yes, it was the commercial introduction via a soundtrack (which one?) that brought us together, but that is all it took to find the rest of the music and continue to this day to look forward to every new release from them.

This album is better on the second half, even with only one single on that half.  Terror kicks ass, Search & Destroy kicks ass, Revolution and Nihil...they're all good.

The ONLY THING I didn't like about this album, to this day, is that the cover art was not the same as the rest of their albums.  I've always like Hughes work, and having this album in the line-up of covers really throws it off.

Anyway, got the one b-side, and three remixes.  Good Stuff.