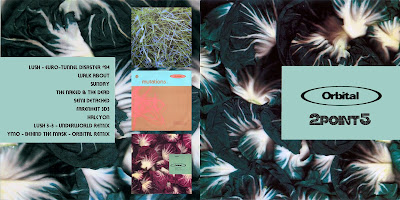 To this day I think I fell in love with Orbital somewhere inbetween Lush 3-1 and 3-2.  Talk about getting lost in the music.  It slips into your DNA and become part of your bloodstream, and don't hardly notice it until you look up and find yourself totally immersed in some of the best Electronica (is it still called that?) that the 90s had to offer.  I remember playing Super Nintendo with one of my college buddies with this album on, and we were sitting there silently and he says, out of the blue "This album is really fucking good", and I didn't even realize it until he said it.  Sounds stupid to think about it now, but at the time it was like a revelation.  Like a "stoned" but with no pot.

I took the singles and the Peel Sessions and arranged the tracks for maximum effect.  You'll like it.  I even through the Yellow Magic Orchestra mix by Orbital in for good measure at the end.

As for the Radiccio cover?  I always thought it was neat.  So have at ya!  Orbital 2.5!  Side C of the Brown album!

Email ThisBlogThis!Share to TwitterShare to FacebookShare to Pinterest
Labels: 1992, Orbital